For our part, the VAEEC worked tirelessly with fellow stakeholders to pass several key pieces of historic energy efficiency legislation, including the Virginia Clean Economy Act (VCEA). This landmark law will pave the way for a carbon-free Virginia by 2045, ensuring investments in energy efficiency, solar, wind, and more. The VCEA mandates 5% energy savings from the investor-owned utilities by 2025, marking Virginia as just the second state in the Southeast to establish a mandatory stand-alone Energy Efficiency Resource Standard (EERS). Additional laws established mandatory benchmarking for state buildings, enabled an on-bill tariff program for electric co-ops, and added an energy audit to the residential disclosure during homebuying. We also saw the passage of a law permitting the state energy office to develop a statewide Commercial Property Assessed Clean Energy, or C-PACE, program.

The VAEEC also advanced energy efficiency in the Commonwealth beyond legislation. We identified the need to change Dominion Energy’s definition of low-income eligibility requirements and worked with our members to make it happen. The new definition will allow weatherization providers to serve even more households across Virginia. Three localities passed C-PACE ordinances and one launched a program. Blower door testing and increased ceiling insulation requirements were included in the recently adopted final draft of the Uniform Statewide Building Code.

At the end of each year, the VAEEC completes a program evaluation, which goes hand-in-hand with our Strategic Plan to answer:

As you might remember, VAEEC staff and Board members met last summer to develop our 2020-2022 Strategic Plan. Taking feedback from our members, we created focus areas for our next three years of work:

To learn more about the VAEEC’s 2020 achievements, watch our short video below.

Our work would not be successful without the support of our members. Thank you for your dedication to the organization and to Virginia’s energy efficiency industry. We look forward to working with you in the new year to make 2021 our strongest year for EE yet.

The VAEEC’s main asks of the incoming administration are included in this one-pager, which summarizes the report we released earlier this year, Why Energy Efficiency is a Smart Investment for Virginia. 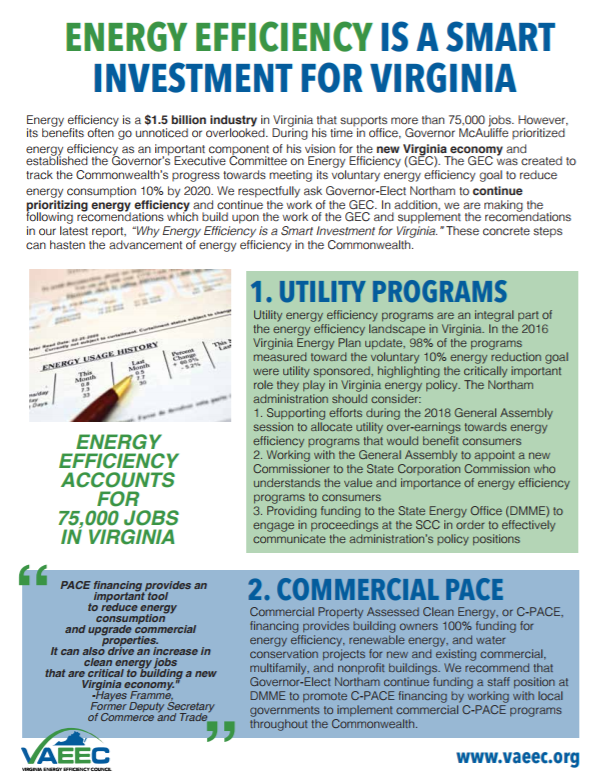 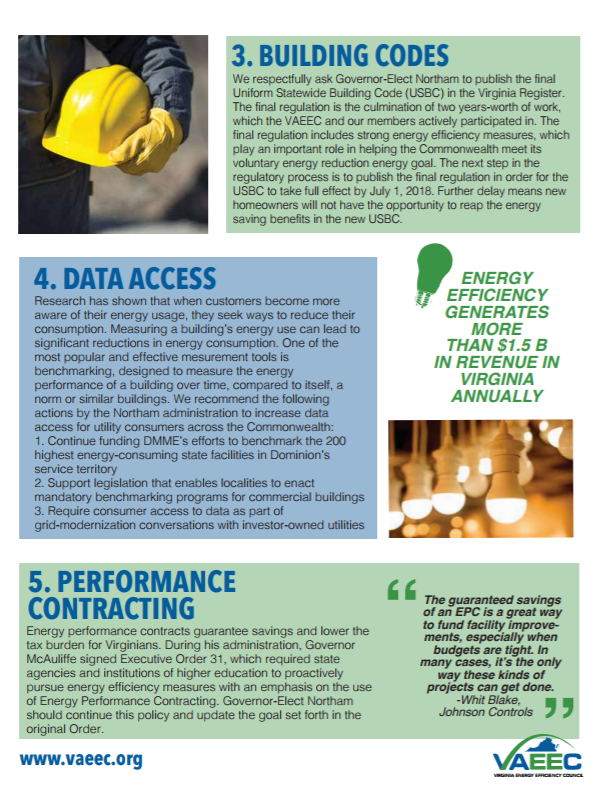 Richmond, Virginia (May 19, 2017) — Virginia’s economy is stronger thanks to the role of energy efficiency, according to a new report released today by the Virginia Energy Efficiency Council (VAEEC) that finds the industry drives $1.5B in annual revenue and accounts for more than 75,000 jobs. The full report, “Why Energy Efficiency is a Smart Investment for Virginia,” is available at www.vaeec.org/data and was presented at the VAEEC spring meeting in Richmond. The report lays out five specific policy recommendations that will not only help the industry continue to grow but will also play a role in future carbon reduction strategies the Commonwealth may pursue.

“With uncertainty about the future of energy efficiency policies and resources at the federal level, it is more important than ever for states to recognize the enormous potential of energy efficiency to advance smart energy solutions,” said Chelsea Harnish, VAEEC Executive Director. “The VAEEC’s 80+ members prove to us everyday that energy efficiency has tremendous potential to drive economic growth, create jobs, shrink utility bills, conserve natural resources, and reduce pollution. Our report outlines an ambitious plan to tap that potential.”

In 2013, the VAEEC released the first-ever census report documenting the energy efficiency industry in the Commonwealth. Our newest report shows that revenue generated from the energy efficiency sector has grown from nearly $300 million in 2013 to $1.5 billion in 2016. The U.S. Department of Energy has found that the industry is responsible for 75,000 jobs across the state.

The report offers five policy recommendations, specifically addressed to the incoming Governor, deemed “the smartest, fastest, most effective routes we can take to put Virginia on the path toward a clean energy future and stronger economy.” They are:

The report pairs each recommendation with a case study of that policy in action, including:

“This report should open a dialogue among energy efficiency stakeholders, policymakers, regulators, businesses, and local and state government agencies about how best to augment the implementation of energy efficient technologies and services,” said David Steiner of D+R International and Chair of the VAEEC Board of Directors. “The many benefits to consumers, property owners, ratepayers, local and state governments, and industry warrant aggressive adoption of best practices to implement energy efficiency throughout the Commonwealth, from the kitchen electrical outlet to the power grid.”

“Implementing the U.S. Environmental Protection Agency’s Clean Power Plan would have minimal impact on electricity costs in Virginia, and could even provide savings for ratepayers under some scenarios, compared with projected energy costs in 2030.” Those are among the findings of a white paper released today by the Advanced Energy Economy Institute.

The basis of the paper is an open-access analytic tool called the State Tool for Electricity Emissions Reduction (STEER) that allows state officials and other stakeholders to consider CPP compliance options and their economic impacts.The paper presents the results of two specific scenarios that are representative of multiple runs through STEER.

Most likely to turn heads is the report’s finding that with energy efficiency and renewables, these targets can be with minimal impact on electricity costs in Virginia compared with business as usual:

“In Scenario A there is a minor rate increase seen, less than a half of a penny per kilowatt hour, compared with a business-as-usual projection. In Scenario B, the scenario using the SCC’s efficiency potential study, we see a decrease in electric rates compared with business-as-usual. In neither scenario do we see significant costs imposed on Virginia ratepayers as a result of Clean Power Plan compliance. The result is likely due to the substantial contribution to compliance made by low-cost resources such as energy efficiency and renewable energy. The scenarios shown here demonstrate that Virginia can achieve its required carbon reduction targets without imposing significant costs on ratepayers compared with business as usual.”

As the Commonwealth moves forward with CPP compliance plans, reports of this nature provide state leaders with another layer of evidence that the targets are achievable when we harness energy efficiency and renewables.

Side note: The American Council for an Energy Efficient Economy (ACEEE) just released the State Utility Pollution Reduction Calculator Version 2 (SUPR2), a tool that allows anyone to explore the cost and pollution reduction potential of different strategies.

Find out more and get access to ACEEE’s SUPR2 here.

STEER for VIRGINIA is available for download as an Excel spreadsheet, with user manual, at http://info.aee.net/steer-virginia.

This year, Virginia Community Capital received a grant from the Oak Hill Fund to explore implementation of PACE financing in Virginia. As part of this grant, VCC held an initial stakeholder meeting on July 14, 2015 where attendees heard about the new PACE law that went into effect on July 1, 2015 as well as from guest speakers from other states. On December 8th, Virginia Community Capital (“VCC”) held the final Virginia PACE Financing stakeholder meeting at the Trane facility in Ashland. At this meeting, the Department of Mines, Minerals and Energy (DMME) gave an overview of the new PACE financial underwriting guidelines that went to effect December 1, 2015 and Rich Dooley, of Arlington County gave an update on Arlington’s plans to issue an RFP for a program administrator. Then I joined Neal Barber of Community Futures to present the findings from our grant research. Afterwards, attendees broke out into groups to discuss these recommendations and offer their insights.

As a seasoned executive within state and local governments for 40 years, Neal was selected to interview local elected officials and staff from across Virginia. During the fall, Neal met or spoke with 35 jurisdictions to gauge the level of knowledge and interest in participating in a PACE financing program. For the most part, his research revealed that few jurisdictions were currently aware of PACE with the exception of those with dedicated sustainability officials. Although there was definitely interest in the concept of PACE as an economic development tool, top conclusions from these interviews revealed that there is a:

Given my deep knowledge of PACE programs around the country and extensive work in Virginia, I was asked to analyze national best practices and develop an initial set of recommendations for our state. Some highlights include:

Although much more research is required to develop a detailed implementation plan, some initial recommendations include:

Arlington County is forging ahead with developing a PACE program. This past week, Arlington held the first of several planned discussions on the benefits of PACE to local stakeholders – this one geared toward commercial real estate lenders. I, along with Arlington’s Rich Dooley, fielded many thoughtful questions during this lively discussion, demonstrating first hand the absolute importance of education when introducing a new product to the market.

There’s been growing momentum in the past few years for energy efficiency, along with a mounting wave of evidence related to its benefits and its potential. Perhaps that’s why it’s headline-inducing when a piece of news goes in the other direction. That was the case earlier this summer when an economics research paper was released by the University of Chicago. It asked in its title, “Do Energy Efficiency Investments Deliver?” and the report responded with a conclusion that the costs outweigh the benefits.

I hesitate to even mention this paper and bring any additional attention to it, as the research has been quickly, thoroughly and appropriately debunked. But at the same time, it serves as a worthwhile reminder that, despite all of the evidence in support of efficiency programs, we still need to continue making the argument that EE benefits are real.

The paper has clear shortcomings, with a number of questionable assumptions including how to measure costs, what should be included as benefits, and which populations are targeted. The primary danger is that this analysis of one program (the Weatherization Assistance Program) in one state (Michigan) could lead to far-reaching, negative conclusions on EE more broadly.

A number of highly-regarded organizations responded, representing a variety of perspectives, and these blog posts are worth a read:

We’re on the cusp of an energy efficiency moment in the U.S., and that’s particularly the case in Virginia where in just the last year we’ve seen:

However, we haven’t reached the point where we can assume that everyone recognizes the value of energy efficiency, and we have to continue to build this consensus in order to turn the promise of EE into reality. This one research paper may have its faults – and it does — but it has served as a useful call to action.

(June 2012) America now has a major new source of energy that could rial the contribution made to the economy by natural gas, coal and nuclear power, according to a report released by the American Council for an Energy Efficient Economy (ACEEE), which concludes that up to about a quarter (22 percent) of current US energy consumption could be replaced by what experts are calling “intelligent efficiency.”
Read the story.