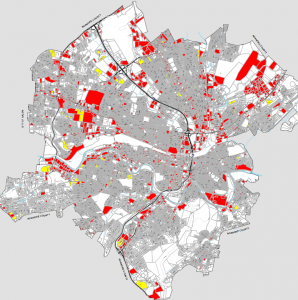 The VAEEC has been engaging with localities across Virginia to educate them on Commercial Property Assessed Clean Energy and to encourage them to move forward with developing a program. One of the main pieces of feedback we keep hearing from localities is that they are hesitant to move forward with C-PACE without knowing the demand from the business community. Along with working with developers, property owners, and contractors to show this demand, the VAEEC has created a series of GIS maps of C-PACE eligible properties for several localities across the Commonwealth. These maps help visualize the supply of C-PACE eligible buildings within these localities while also demonstrating the potential demand for C-PACE.

These maps were created using publicly available data and include commercial, industrial, agricultural, and nonprofit buildings, along with multifamily residences with five or more units. All maps include properties that were built or last renovated before 1990 to account for the typical useful lifespan of eligible improvements, including roofs and HVAC systems. Some localities requested additional maps to convey different timeframes.

If you have any questions, please contact Jessica Greene (jessica@vaeec.org).