With a score of 13 points out of a possible 50 (same score as 2015), Virginia dropped two rankings from 31 to 33 in this year’s State Energy Efficiency Scorecard. According to the scorecard press release from the American Council for an Energy Efficient Economy (ACEEE), Virginia’s lower score is due to our inability to keep pace as other states expanded efficiency efforts.

Download the Virginia one-pager, the full State Energy Efficiency Scorecard and report, or the updated Virginia entry in their State and Local Database. 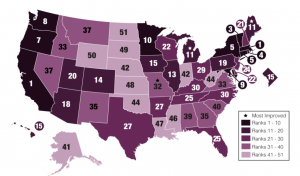 The State Scorecard is a helpful illustration of the strengths and weaknesses of each state’s energy efficiency components and provides an opportunity for all states to learn from each other.

The ACEEE also encourages growth in Virginia’s Combined Heat and Power (CHP) sector. CHP is the successful generation of electricity and useful thermal energy in a single, integrate system that produces 80% combined efficiency as opposed to 45% for traditional power plants. However, CHP systems require the purchasing of backup power from the electric grid as well as the selling of excess electricity back to it. A lack of established parameters and procedures for connecting to the grid drives up costs and stifles CHP deployment in Virginia. 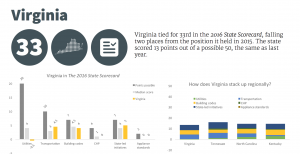 California reaps the benefits of CHP through a total of 28 installations. Another installation of note is their Self-Generation Incentive Program (SGIP) that provides incentive payments to support the commercialization of new, efficient CHP technologies. CA’s CHP energy resources are held to the standards of the Qualifying Facilities and CHP Program Settlement; the program provides targets and requirements that facilitate the efficient production of CHP.

While highlighting other state’s successes, the Scorecard does not fail to recognize Virginia’s innovative efficiency programs. Virginia received a stellar five points out of a possible seven for state-led initiatives, ranking us 10th in the nation for these programs. This performance marks a high potential for the future of the state’s energy efficiency programs. Virginia exhibited notable performances in our building code policies as well, ranking 28th in the country.

The Scorecard can be used as a tool to motivate Virginians to take note of the Commonwealth’s energy efficiency setbacks and to push for improvements that our neighboring states are already implementing.