A lot has happened on the building codes front since we put out a call for nominees for the board of the Virginia Department of Housing and Community Development (DHCD). As you may recall, this board is charged with updating Virginia’s building codes.

Over the last several years, the makeup of this board has changed in a positive way. As a demonstration of his commitment to energy efficiency, Governor McAuliffe has appointed several members to this board, including one specifically recruited by the VAEEC, who acknowledge the science and economics that support rigorous energy codes.

However, even with the new board diversity, there is much work to be done. In 2014, Virginia adopted the 2012 “model” building codes published by the ICC with amendments. In the case of the residential codes section, Virginia’s amendments created a code that looks more like the 2009 IECC rather than the 2012 IECC. Per Virginia policy, amendments made in previous years stand until they are expressly removed or altered by the board.

Check out this great fact sheet on Virginia and the 2012 IECC codes. 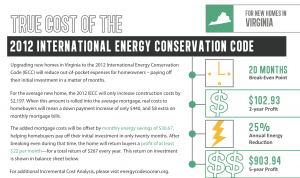 In the most recent State Energy Efficiency Scorecard, the American Council for an Energy Efficient Economy (ACEEE) ranked Virginia 28th in the country on building code regulations, and there is still considerable work to be done.

Currently, the only change to the 2012 residential amendments that has received support from the board is changing the requirement for high efficiency lamps in new homes from 50% to 75% (an improvement the DHCD board declined during the last cycle). VAEEC Governance Board member Andrew Grigsby of the Local Energy Alliance Program (LEAP), has two proposals before the board to require mechanical testing to measure residential building air-tightness and duct leakage (doing away with the visual inspection options). These proposals will be taken up at the next meeting on October 24th along with:

Proposals that were voted out unfavorably at the September Codes and Standards Committee:

The Governor’s Executive Committee on Energy Efficiency has been presented data showing advanced building energy codes should be a vital component for Virginia to meet its goal to reduce energy consumption ten percent by 2020.

Everyone wins when new homes are built to the most cost-effective efficiency standards: consumers, builders, trades, grid operators, and society as a whole. This is why VAEEC continues to support rigorous energy codes.

10/24/16: DHCD board committee meets to approve or reject remaining proposals

September and October 2017: DHCD board committees meet to vote on final regulations

The full DHCD board timeline found here. Or check the DHCD website for details.