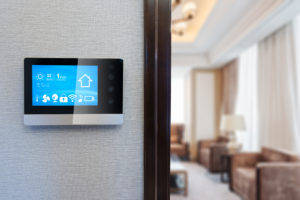 The Dominion DSM case was held Wednesday, March 20, 2019 before the three Commissioners of the State Corporation Commission (SCC). This was the first case being heard by the new Commissioner, Judge Patricia West. Our previous blog post on the DSM application went into detail about the programs themselves so this post will only focus on the proceeding. You can review all proceeding materials on the SCC webpage for this docket.

The proceeding was broken up into three main sections:

At the beginning of the proceeding, the Commissioners heard oral arguments on whether or not lost revenues should be considered as part of Dominion Energy’s commitment to propose $870M worth of energy efficiency programs over the next ten years, as part of the 2018 Grid Transformation and Security Act. Counsel for VAEEC reiterated the position, as stated in our legal brief, that lost revenues should not count towards the $870M, since the the statute that states this commitment does not mention lost revenues. Walmart, environmental respondents and the SCC staff agreed with our arguments. In addition, while the Attorney General’s office took no official position, they did mention in their oral arguments that no one- in either oral arguments or public comments (written and oral)- supported the Company’s position that lost revenues should be included in the commitment to propose $870M in energy efficiency programs over the next decade. The Commissioners asked a lot of questions during oral arguments and are anticipated to make a ruling on this issue in their Final Order for the DSM proceeding.

During the proceeding, VAEEC, environmental respondents (Appalachian Voices and Natural Resources Defense Council), and Sierra Club supported all ten of the proposed EE programs (11 demand response programs in total). The SCC staff and the AG’s office were “unopposed” to seven programs and had “remaining concerns” about the other four.

During the hearing Dominion Energy staff stated that due to a calculation error regarding higher-than-expected participation rates for the Residential Engagement program, the Company had reduced their overall budget request to $203.9M.

VAEEC witness, Rachel Gold, with the American Council for an Energy-Efficient Economy, took the stand in support of the proposed programs and explained the value of benchmarking to evaluate whether or not the target set by the General Assembly- for Dominion Energy to propose $870 million in energy efficiency programming over the next decade- is achievable. The good news is, according to the results of that analysis done by ACEEE, this target should be easily attainable.

The seven programs with unanimous support were:

Initially, SCC staff stated that they were “unopposed” to the above programs. However, after further pressing by Commissioner Christie, SCC Staff stated that they did, in fact, support these programs. One interesting thing to note during this back and forth is that the Commissioners were expressing frustration with both Staff and the Company regarding the lack of analysis based on real energy savings. They argued that Staff should be able to take positions on proposed programs that are based on previously-approved programs since there would be real-energy savings data captured for those programs. While this data is provided by the Company in their annual EM&V filings, the Commission felt that the data could be provided in an more easy-to-digest format. Commissioner Christie directed the Company to produce a spreadsheet on previously approved programs to show the actual program costs and actual kWh savings. The Company asked for a one-week deadline to submit that table into evidence.

The inclusion of this type of table in future filings can bolster future applications by showing just how much savings are being realized by these programs, which could help win approval more easily. While the Commissioners are skeptical of energy efficiency programs and the projected savings they can achieve, that skepticism can potentially turn to support if strong energy-savings numbers are achieved in prior program iterations.

As mentioned above, SCC staff had concerns regarding the four remaining programs, which were:

The Commission has until June 3rd to make their decision. We will be sure to let our members know the outcome once we have a chance to review the Final Order, so stay tuned for updates.

During the hearing, VAEEC Board Member, Michael Hubbard, with Dominion Energy, announced that the Company had released their RFP for their next DSM filing the week before for 15 new programs. We have had a chance to review a summary of the RFP which includes some exciting new programs such as:

We will continue to keep our members apprised of how these programs shape up for the next DSM filing in October 2019.