The American Council for an Energy Efficient Economy (ACEEE) released its annual report evaluating and ranking America’s largest cities for their energy efficiency. The City Energy Efficiency Scorecard is based on policy and program efforts and includes recommendations for improvement. The scores are given for five categories: local government operations, community-wide initiatives, buildings policies, energy and water utilities, and transportation. 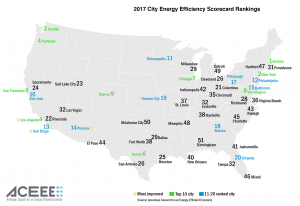 Virginia and its localities demonstrate a commitment to leading energy efficiency and climate change policy. In the wake of President Trump’s decision to withdraw the U.S. from the Paris Climate Agreement, Virginia has declared that it will continue efforts to mitigate climate change.
On June 5th, Governor Terry McAuliffe joined the U.S. Climate Alliance, a group of states in solidarity to uphold the goals of the Paris accord.

“As the first state in the Trump era to take executive action to limit carbon emissions and create clean energy jobs, Virginia is proud to join this alliance of states, cities and businesses. President Trump’s announcement to withdraw the United States from the Paris Climate Agreement does not speak for the states and cities that are committed to fighting climate change and paving the way for a new energy economy. If the federal government insists on abdicating leadership on this issue, it will be up to the American people to step forward — and in Virginia, we are doing just that.” –Gov. McAuliffe

In addition to support at the state level, as of June 3, 2017, more than two hundred mayors of U.S. cities have indicated support for the objectives of the alliance. Among them are VAEEC members Alexandria, Richmond, Charlottesville and Arlington County.

Virginia leaders from both the public and private sectors are joining forces to fight climate change and uphold the Paris accord.

These locations, as well as Virginia businesses, Randolph College and the University of Richmond (another VAEEC member), have signed the “We Are Still In” agreement.

Among the 51 cities ranked in the ACEEE scorecard, Richmond and Virginia Beach ranked 28th and 36th respectively. In addition, Richmond was one of three cities to earn a perfect score for municipal energy efficiency-related goals. The Scorecard and rankings act as a marker for progress and encourages cities to further energy efficiency efforts.

Arlington County and Charlottesville were also listed on the Scorecard website as unranked cities. They used the ACEEE criteria to create a self-score equivalent to the Scorecard’s ratings and were highlighted for their efforts and commitment to energy efficiency.

All four of the Virginia locations listed are VAEEC members. In fact, ACEEE awarded points for VAEEC membership. In their view, as an advocate for higher energy standards, membership with the VAEEC reflects a commitment to improving efficiency.

Here’s the breakdown of each city’s ACEEE score. 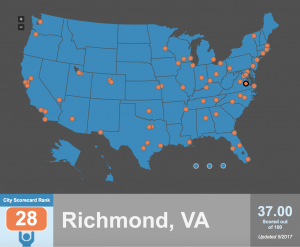 Virginia’s capital scored 37.00 out of 100 possible points. Richmond earned high marks in the local government category, outlining numerous policies for energy goals and strategies to reduce usage.  One of the more ambitious goals began in 2014 with the RVAgreen Annual Progress Report. A goal was set to reduce the government greenhouse gas emissions by 80% by 2050 using 2008 as a baseline. Though this is a significant reduction rate, the ACEEE says Richmond is on track to achieving its goal. The report centered its recommendations for improvements in the energy and utility category, as well as transportation. 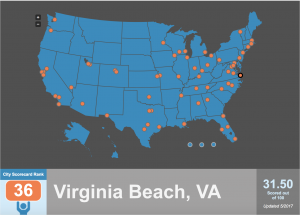 Virginia Beach scored 31.50 out of 100 possible points. Scoring similarly to Richmond, Virginia Beach was recognized for its Sustainability Plan which outlines some of the energy-efficiency related policies for its government operations. Virginia Beach also benchmarks 100% of local government buildings in ENERGY STAR Portfolio Manager. In addition, Virginia Beach has several community-wide initiatives, including the adoption of an urban heat island mitigation goal to achieve 45% urban tree canopy cover citywide by 2023. Like Richmond, Virginia Beach’s opportunities for improvement were in energy and utilities, and transportation. 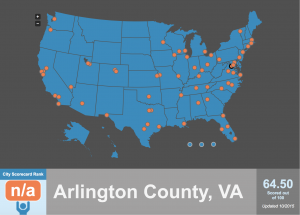 Though Arlington was not officially scored, the self-score generated was 64.50 out of 100 points. This places Arlington on par with some of America’s largest, most energy efficient cities. The county has outlined comprehensive strategies to reduce energy consumption and the Arlington Initiative to Rethink Energy oversees the implementation of these policies. Arlington also scores impressively in both building policies and transportation, with a Master Transportation Plan that aims to promote more pedestrian and bicycle transit. Though scoring high in most categories, room to grow can be found most in energy and utilities. 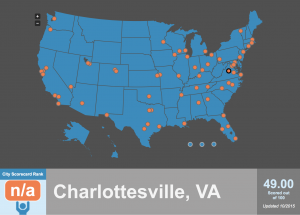 Charlottesville also self-scored and earned 49.00 out of 100 points. Of the Virginia locations scored, Charlottesville earned the most points for energy and utilities with a funded partnership with, another VAEEC member, the Local Energy Alliance Program (LEAP) and rebates for water conservation initiatives. Charlottesville also has green building requirements for municipal buildings and works through LEAP to fund the limited time 0% Power Saving Loan Program as part of its initiatives for efficient buildings. Charlottesville’s community-wide initiatives and local government operations are where improvements can be made most.

To see the full breakdown of scores for each city visit the ACEEE’s website.