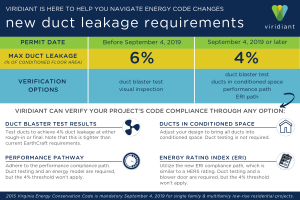 A lot of progress has been made on updating the Uniform Statewide Building Code (USBC) since our last blog post. First, the update that was finalized last year (the 2015 update for anyone who gets really into the weeds on this topic), went into effect earlier this month. Our friends over at Viridiant made a terrific infographic outlining the energy changes in that update and are hosting several compliance trainings across the state.

Over the summer, VAEEC and some of our members attended DHCD energy subgroup meetings to identify areas of consensus among stakeholders on the current update (the 2018 update for anyone who gets really into the weeds on this topic). You can read about all of the proposals discussed in the initial subgroup meeting in our last blog post on building codes.

We are pleased to announce that VAEEC and our members were able to successfully reach a compromise with the Homebuilders Association of Virginia, and other stakeholders, on several key proposals. The biggest gain is that blower door testing will now be required on all new homes that are constructed after this update goes into effect. Two smaller proposals also made it into the draft USBC- updating REScheck software and requiring a certificate on the electrical box that includes various energy details of the home. These proposals were voted on at the final workgroup meeting and went before the Board of Housing and Community Development who voted to include them in the draft USBC on September 16th.

While our insulation proposal was deferred until next year, we have an agreement with the homebuilders to do a couple of information sessions throughout Virginia with homebuilders to help them better understand what would be required with an increase in the insulation R-value. We hope to see some improvements to the insulation requirements in the final USBC. 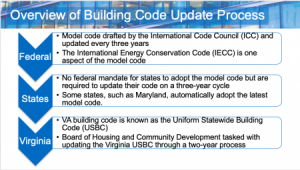 So, what’s next? We are waiting for the draft USBC to be placed in the Virginia Register, which will kick off a 30-day comment period. Then, next year, the entire process begins again as we move into the final phase of this update. The USBC update process is described in detail on our Building Codes page. We even have a handy graphic to explain it.