Since 1970, April 22 has become a globally recognized day of action and education. Earth Day events are coordinated in over 192 countries and bring people together to celebrate the amazing world around us and recognize the worth in protecting it. Our planet is remarkable and there’s much we can learn from it. In fact, there’s a scientific discipline dedicated to studying and copying nature–biomimicry. 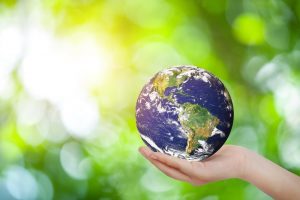 Biomimicry aims to learn from nature to engineer the future. The discipline looks to solve problems faced by humans by observing how organisms and natural systems deal with the very same issues. Reducing energy use is one problem scientists and engineers are tackling by looking at the world around them to inspire solutions.

Here are four examples of energy efficiency through biomimicry:

In the U.S. alone in 2016, 40% of total energy consumption came from the commercial and residential sectors, primarily from buildings. Buildings suck energy in their heating and cooling systems. Even energy efficient buildings with blinds and shades designed to conserve energy use plug-in electricity and batteries. Cones produced from trees like pines, spruce, hemlock, and fir respond naturally to humidity and moisture to open, using minimal energy in the process. Cordt Zollfrank, a chemist, forest scientist and materials researcher at the Technical University of Munich (TUM), is working to design buildings that would respond similarly. The concept could be used wherever buildings experience humidity changes, such as in climate control units.

Humpback whales are the largest animal on the planet, yet they maneuver through the water fast enough to chase fish. Not only are humpbacks quick enough to chase down a meal, but they have to make tight turns as well. Humpbacks are able to make tight maneuvers by putting their flippers at sharp angles of attack. Angle of attack in fluid dynamics is the angle between a reference line representing a body moving and the vector line representing the motion between the body and the fluid through which it is moving. Angles of attack and lift are closely linked, so raising the angle of attack increases lift as well. This movement is helped by tubercles, which create scalloped edges on the leading side of their flippers. This gives them more lift to turn. Professor Frank Fish at West Chester University studied tubercles and the scallop shape and found that tubercles increased the angle of attack up to 42 percent. Engineers have begun to add tubercles and scalloped blades on wind turbines, creating a higher angle, enabling more lift and increasing efficiency.

Equipment in buildings usually function independently and in isolation of one another. They are set on a single thermostat or timer that doesn’t have the capability of knowing what else is currently operating in the building. Since equipment doesn’t communicate with one another they often run at the same time, wasting energy. The clean technology company Encycle created Swarm Logic which can cut a property owner’s electric costs 5-10% or more a year. The technology is based on the way bees and other social insects communicate and coordinate with one another. The controllers establish a wireless network among power-consuming appliances and this enables them to communicate among themselves autonomously. Once the communication network is set then an algorithm is created so the connected appliances spread out their energy demand.

Boeing and NASA have teamed up to find ways for major airlines to save jet fuel. The answer they came up with? Copy geese. By lining up cruising airplanes in a V-formation like migrating geese, the planes leap in efficiency without investing in new technology or changing the designs of individual planes. The concept is called wake surfing. It involves harvesting energy from a lead plane by cutting down on the drag and wind resistance from the planes (or birds) following the leader. The method is still in the works but has the potential to cut down fuel bills and make air travel more energy efficient.

Nature has already solved many of the problems we face today. Animals, plants, microbes, and systems have undergone billions of years or trial and error. These biomimicry breakthroughs in energy efficiency are just a few of the ways emulating nature is shaping the future of sustainable innovation.